Elon Musk is best known for electric cars, his quest to put humans on the surface of Mars (SpaceX) and his recent bid to acquire Twitter. However less avid followers of the Tesla tycoon may have missed his foray into satellite internet provision.

Since 2019 Musk has been launching satellites into near-earth orbit with the aim of creating a network for the provision of comprehensive, high-speed, low-latency satellite internet. Dubbed “Starlink,” the project has seen around 3000 satellites launched to date, and is currently available in 32 countries, with plans for significant expansion underway.

Starlink aims to bring the internet to parts of the globe where connectivity infrastructure is lacking. These might be highly rural areas lacking basic ground-level infrastructure, or simply regions where poor ground infrastructure results in a slow, unstable broadband connections. Starlink may also be of benefit to anyone, anywhere seeking an improved broadband connection, with the residential service offering download speeds of between 50 and 150mbps and the business service up to 350mbps, with latencies between 20 and 40 ms for both.

Provided Starlink covers your corner of the globe, all you need is a clear view of the sky and you’re good to go.

How does Starlink work?

There are three elements to Starlink: the “satellite internet constellation,” a network of ground stations and end user dish infrastructure.

“Satellite internet constellation” refers to the network of satellites that SpaceX has been launching since 2019. There are currently around 3000 of these satellites in low-earth orbit.

Why are so many satellites required?

In order to provide a low-latency (small time delay) internet connection, Starlink satellites have to be positioned relatively close to the surface of the earth compared to other communication satellites, at a distance of about 550km. Due to their closeness, each satellite’s field of coverage is relatively small. Therefore, in order to provide a continuous, uninterrupted internet connection, the satellites follow each other in sequence, with a new satellite continuing the broadcast when the previous leaves the ground dish’s field of view.

It’s best to think of the Starlink network as a vast, moving net which will eventually consist of around 40,000 satellites, bringing a high-speed data connection to areas previously lacking such connectivity. 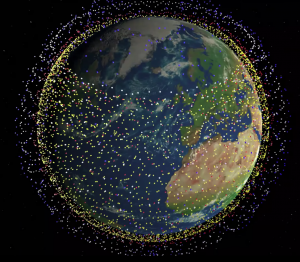 The second component of Starlink is its ground station network. These act as a gateway between users and the world wide web via the satellite network. There are currently 40 of these stations in the USA, with 3 located in Florida.

Ground station locations are shown below, denoted by the brown broadcast symbol. 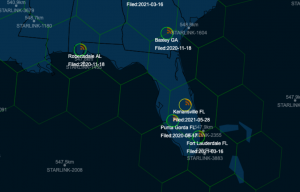 Lastly, the final component in the system is the end user’s dish infrastructure. Upon paying the one-off hardware cost, users receive all the equipment they need to connect to the internet. The kit includes the dish, a ground stand, a Wi-Fi modem and all the supporting cables. The Starlink app helps users find a suitable location; ideally somewhere with the view of the sky unobstructed by trees and buildings. From unboxing, Starlink typically connects users to the internet in as little as 30 minutes, with a further 12 hour optimisation period following.

While satellite internet is nothing new, Elon’s Starlink service is unprecedented in its ambition and scale of execution. While the project promises to bring internet connectivity to parts of the globe where broadband infrastructure is non-existent, it also offers higher speeds to rural Americans, who have traditionally suffered with poor quality DSL connections. Stay tuned for more information about this fascinating service, including the benefits it could offer your business.